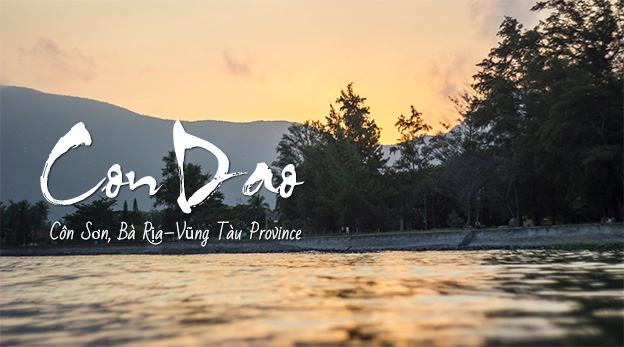 Con Son wasn’t originally part of our Vietnam itinerary.  After booking our flight to Thailand for the 17th October, we arranged to link up with friends in Vietnam 11 days later. This suited us, as we never intended to stay in Thailand for very long, but use it as a stepping stone for our onwards travel. We ended up spending days 1-4 in Bangkok before flying to Ho Chi Minh City. The plan was to find a nice beach south of the city for a mini holiday before our friends arrived.

Before doing much research we thought it would be easy to head to Vietnam’s south coast from Ho Chi Minh City. Unfortunately, we soon discovered that there were not any holiday style beaches south of the city. With our flights to Ho Chi Minh already booked and over a week there until our friends flew in to meet us, we needed to come up with a plan.

Looking at the map again I noticed Con Son. After a little research we were intrigued. However, at over 3.5million VND each for flights (GBP 120), it wasn’t looking like the cheapest option and this almost changed our mind. But, I’m definitely glad we went, as the extra bit of money we spent was definitely worth it, and I’d go again for longer next time. 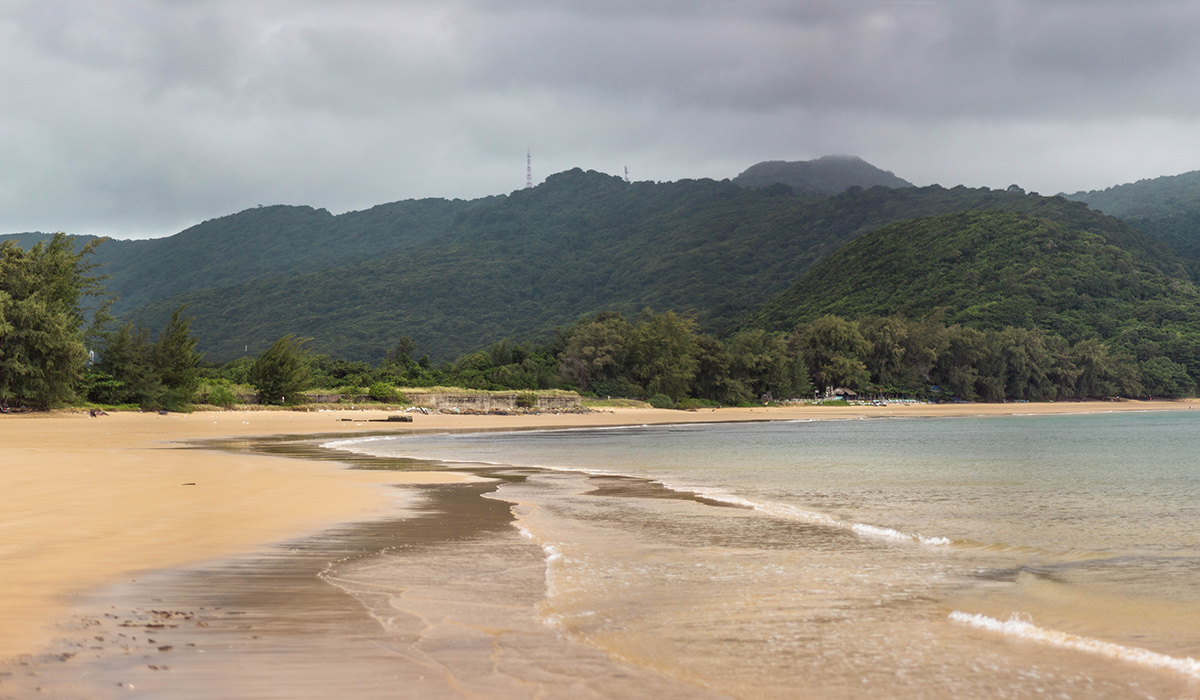 We visited Con Son as the weather was beginning to become more changeable (the start of the low season), we had a mix of rain and sunshine on our visit.

As our tiny plane descended into Con Dao airport, it felt a bit like we were entering Tracey Park Island from the Thunderbirds!

The runway takes up the entire width of that section of the island and nothing but a concrete wall separates it from the beach. There were few western tourists, and most of these seemed to be staying at the Six Senses, which was way above our budget at £360 a night!

We had been told we could rent motorbikes from our hosts at the Airbandb homestay we had booked, but we hadn’t anticipated being picked up from the airport on a motorbike!

Our host, Hue, spoke very little English and her French husband Lionel was away on business when we arrived. She introduced herself as we came out of the tiny arrivals room and asked if we rode motorbikes.

She loaded my small carry on case onto her own bike and kindly carried my 36 litre rucksack on her back, Alex loaded his 65 litre rucksack onto his lap and I got on the back (after helmets were handed out). Luckily, their place was five minutes from the airport and our first motorbike journey was an easy ride.

Thus began our introduction to driving motorbikes. If you are planning your own trip, get your international driving licence before you go to avoid voiding any insurance you might have. UK residents can find out more about getting theirs, here.

We didn’t know it at the time but Con Son would would turn out to be our highlight of Vietnam. The cheaper flights often sell fast and it is a popular destination of many Vietnamese holiday makers, keeping the island a path less travelled by western tourists. We discovered this is rare in Vietnam, especially if you head to any of the top destinations like Ha Long bay or Hoi An. I’m not sure if it will remain so, as we saw lots of roads being built to more secluded places.

After dropping our bags off and eating some of Hue’s amazing and very reasonably priced food I decided I needed to give driving the motorbike a go. Learning with someone on the back isn’t the easiest way to learn, however, I managed OK (apart from when I ran over a snake).

We spent our days driving round the island, exploring local beaches and sampling local food. The main town has a long promenade with crumbling French-style streetlamps – where you can see turtles and rarely dugongs. You can also pick up some amazing street food here including Banh Mi.

There’s also a lovely little beach that we swam in at dusk one evening.

We did an epic trek one day which involved walking down the beach on the north side of the island. The walk to Đầm Tre needed timing correctly with the tide, or else we would be stuck wading through the sea around the airport’s runway wall. The walk along the beach took an hour or so, followed by a jungle trek. For more information about this walk, click here.

The wildlife on Con Son is amazing and included giant black squirrels, crab eating macaques, not to mention the turtles, and possibly dugongs and dolphins.

After a long slippy walk through the jungle, we arrived at a Rangers Station, and despite not having a ticket, they let us through and we swam out into the coral reef. We didn’t venture far out enough to the deeper reef that was in a healthier condition, but there was still some amazing snorkelling.

I sat on a rock and watched Alex swim out further as storm clouds began rolling in. 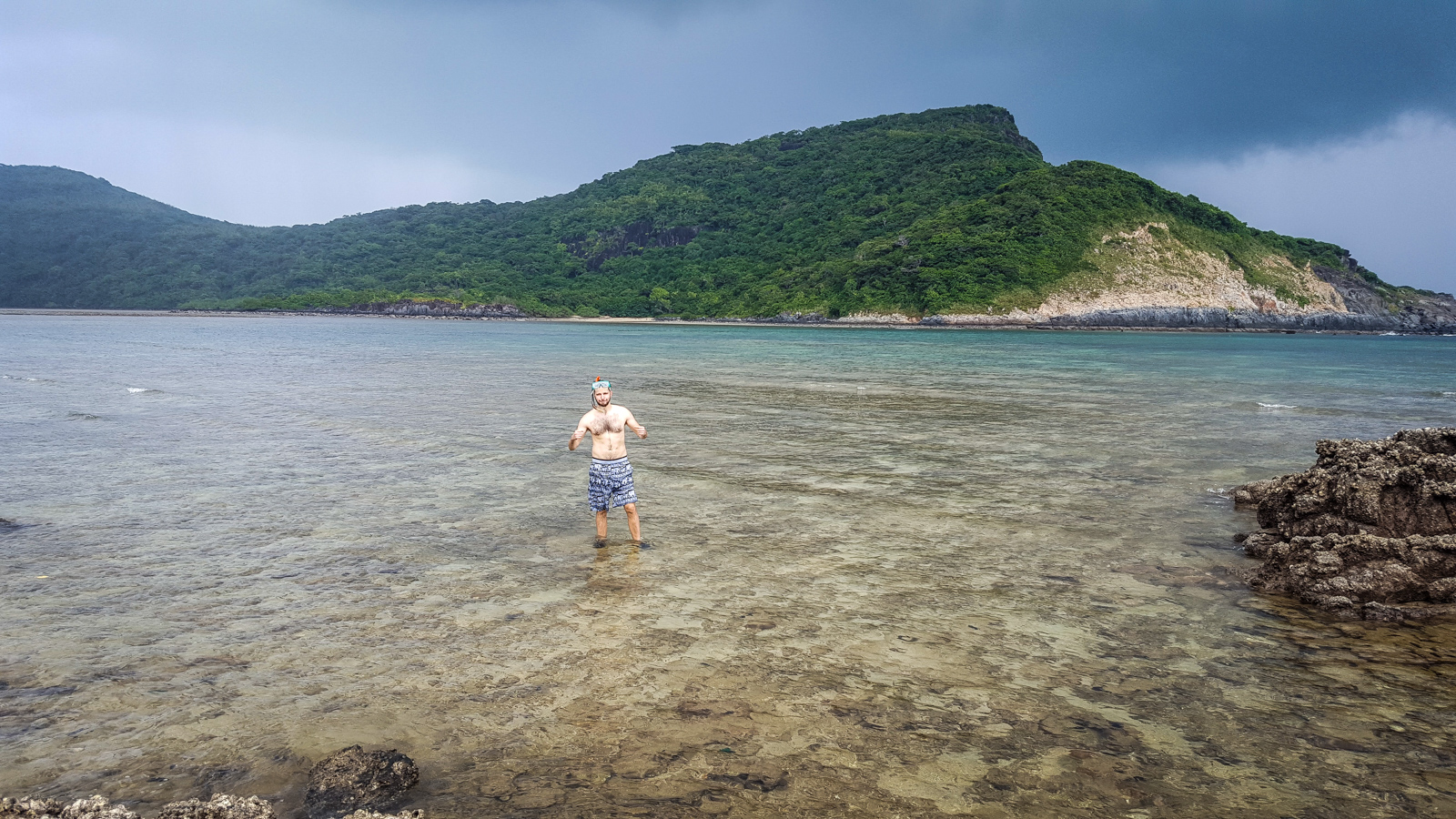 We made a dash for shore and got caught in the start of a wonderfully tropical rain shower. There was nothing for it but to recline in a hammock and see if it would pass, but as time ticked on we became increasingly aware that we needed to make it back along the beach before high tide, and that we had a two hour hike ahead of us.

So we slipped and slid back along the forest trail, through newly formed streams that cascaded across our paths, before eventually navigating along the beach and back onto the bike.

Driving along Con Son’s coastal paths was such a delight, and we were often joined by one or two white herons, who took flight as we passed.

On our second to last day Lionel arrived home and he recommended a good spot on the local beach to snorkel, which was wonderful, despite the poorer visibility due to the rain.

You know you’ve fallen in love with a place when you really don’t want to leave, and that’s how we felt on our last day, when we finally did have to say goodbye. In fact, we nearly didn’t leave as we almost missed our flight, only realising when we double checked our departure time during a leisurely lunch on the beach, and then having to make a mad dash back to pack and then rush to the airport, but maybe that’s another story!